Efstratia Kalamvoki graduated in 2000 from the department of physiotherapy, University of Sydney, Australia with a Masters degree in neurological physiotherapy in 2003.  From 2006 until 2012 she worked as a clinical educator and tutor at the Department of Physiotherapy of the Technological Educational Institute of Athens. Alongside her studies and her work she has attended plenty of seminars and has published scientific articles. Some of these seminars include methods such as Bobath, functional physical therapy, vision training, evaluation of infants and assessment and construction of orthotics.

In addition, she has attended many conferences on physical therapy, as well as pediatric neurological issues, making sure she is always up to date regarding each new method and evidence based practice.

During her career she has worked in hospitals and rehabilitation centers in England and Australia. She has a license to practice physical therapy and is a member of the Association of Physical Therapists in both Greece and Australia. 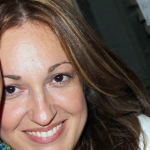 She has attended annual awareness seminars in Psychoanalytic Psychotherapy and Cognitive Psychotherapy at the Psychiatric Clinic of the National University of Athens, and the three-year Seminar of the Family Therapy Unit of Psychiatric Hospital of Athens.

Today she is a scientific associate of the Psychiatric clinic of the General hospital for Children “Agia Sophia” and works as a Pediatric  Psychiatrist in the Mental Health Mobile Unit NW Cyclades ( Sifnos ) – PTC. 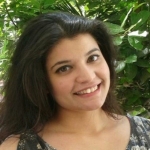 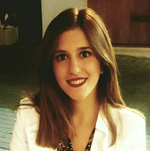 Anastasia Athanasa is a licensed physical therapist, graduate of the Department of Physical Therapy of the Technological Institute of Lamia. She completed her six month internship at the physical therapy department of Paidokinisi in October 2015. After her internship she remained and is working as a member of the physical therapy team. During her studies she worked voluntarily at the General Hospital of Rhodes “Andreas Papandreou”. She has attended many conferences about pediatric physical therapy as well as seminars concerning the construction of special proprioceptive soles for children with cerebral palsy. 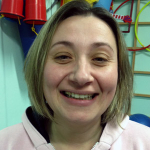 Evangelia Zioga graduated from the Technological Educational Institute of Occupational Therapy in 2003. Alongside her studies she has done volunteer work in semi-independent living with people who have cognitive and psychiatric problems. Subsequently, she has collaborated with many private centers

She has also attended many conferences and workshops for children who are in the spectrum of autism, with special interest in behavior management. 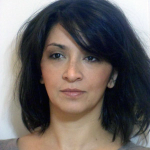 Georgia Koiliari is a registered SLT, an LSVT LOUD® CC with a BSc in Speech & Language Therapy from the Speech Therapy Department of the Technological Educational Institute of Patra (2003).

She has worked as an SLT in special needs schools and assisted inclusion programs for children with ASD. Her work experience also involves being a Scientific Director of early intervention programs, Supervisor in SLT Academic Clinical Laboratories (II, III) and graduate training (TEI of Western Greece and European University of Cyprus) and a Scientific Director of the SLT department in Paidokinisi. She has worked in collaboration with the municipalities of Alimos and Agios Demetrios conducting screening tests for Speech, Language, Voice and Swallowing Disorders in preschoolers. She also works in the private sector offering her services.

She has attended many seminars, including LSVT® LOUD, P.E.C.S., TEACCH, Verbal Behavior, Social Stories and Comic Strip Conversation. She received a PgCert in Special Education: Diagnosis, Therapy, Counseling from the National University of Athens and a Certificate of completion in Edification in Childhood and Adolescence from the National University of Athens.  She has given oral presentations and a poster in the 28th World Congress of the I.A.L.P , in the 8th Panhellenic Child- Neurology Conference and in “Autism: Modern views on Etiology and Pathogenesis”. She has written articles in journals, WebPages and popular science magazines.

She has a license to practice speech therapy and is a member of the Greek Association of Speech Therapists (SELLE), a member of the International Association of Logopedics and Phoniatrics (I.A.L.P), a scientific associate for the WebPages www.babyspace.gr and www.iatronet.gr  and a selected Head of SELLE’s Ethics Committee from 2009 to today.

Eugenia-Anastasia Niarchou has graduated from the Department of Speech Therapy of the Technological Educational Institute of Patra. During her studies she attended the 19th Pan-Hellenic Medical Seminar on Otology – Audiology – Neurotology. She completed her clinical training at the 1st Special School of Patra and at the General Academic Hospital of Patra. Furthermore, she completed her six-month internship at the Department of Speech Therapy at Paidokinisi, in March 2016. She has collaborated with the municipality of Alimos and Aghios Dimitrios for the purpose of a prevention program , detecting disorders in Speech, Language, Voice, Flow, Communication and Swallowing in pre-school children.